The Africa we want is upon us– Kagame

President Paul Kagame has said that the Africa we want is being built piece by piece following increased progress towards achieving the goals Africa has set for herself.

Highlighting the progress on the African Continental Free Trade Area, President Kagame announced Burundi, Lesotho, Namibia, South Africa and Sierra Leone as the five new signatories bringing the number of signatories up to 49 member states with six members who have ratified.

“The Africa we want is being built, piece by piece, before our eyes. Let’s keep it up, and do even more, and better, going forward,” Kagame said.

Earlier in the day, President Kagame attended a luncheon on the Financing of African Union-Led Peace Support Operations hosted by President Abdel Aziz of Mauritania in Nouakchott, Mauritania.

The meeting was attended by French President Emmanuel Macron and African Union Heads of State and Government.

The session was on the sidelines of 31st Ordinary Session of the Assembly of Heads of State and Government of the African Union which ended yesterday.

The President observed that with improved predictability of peace support operations, the continent will be in a better place to maintain stability.

“The issue of predictable financing for peace support operations is a critical one, as we work to ensure security and stability on our continent,” Kagame said.

The AU 2019 budget presented at the summit has reduced external dependency and increased efficiency as well as boosted contributions to the Peace Fund.

This is also set to improve Africa’s engagement with the United Nations Security Council towards funding peacekeeping operation in the continent.

The President welcomed input by France towards improving peace operations on the continent saying that they are an important partner.

“France is an important partner in the fight against terrorism in Africa. This is why we are pleased to have this conversation with President Macron today, to ensure that peace operations on the continent have sufficient and sustainable funding,” he said.

The President also met with Chief Executive Officer of SoftBank Masayoshi Son to discuss investment in solar energy in Africa.

At the meeting, Kagame was joined by President Alpha Condé of Guinea and AU Commission Chairperson Moussa Faki.

Masayoshi Son pledged to invest up to $100 Billion in solar energy in Africa.

Commenting on the investment, Kagame said that it was a huge partnership that could create a difference in a resource that would have otherwise been wasted. 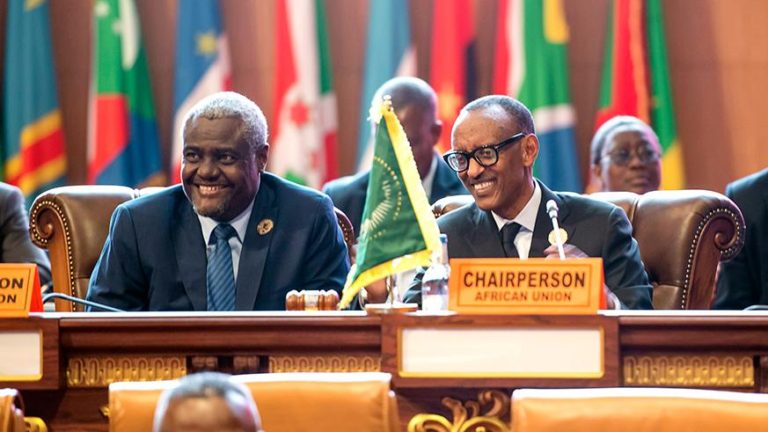